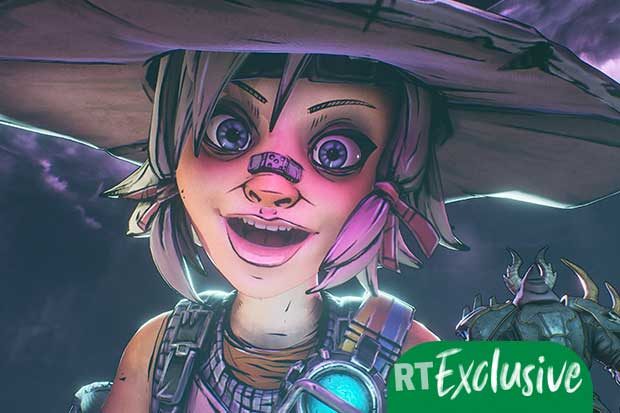 In the build-up to the game’s March launch, RadioTimes.com hopped on a Zoom call with Tiny Tina’s sound overlord Mark Petty to talk about the production challenges of working from home and the creative solutions found by Petty. himself, game director Matt Cox and their talented teams.

Petty starts off by telling us that Tiny Tina’s Wonderlands “was entirely developed in a work-from-home environment due to COVID, which changed our process a bit. The creature comforts we used to have in the office , to have the studios, to have the sound stage, to have the voiceover booth, to have our control rooms, all those things that you see around me.

“So we had to rethink our approach to sound design in particular. One of the things about Wonderlands, jumping from the sci-fi universe of Borderlands, was the word ‘fantasy’ and the word ‘magic’. We So we started thinking about how do we make that transition? And what does that transition look like?”

The first step, once the team members were safe at home, was to start compiling an audio language. As Petty says, “For the sound design, we started pulling Harry Potter references, listening to magic, and forming descriptive words. Like, ‘Wow, you know, that spell was really fluffy.’ It was soft, and it was wispy, and you could hear the air coming around you, and that sort of thing.”

After checking out some concept art and consulting with other Gearbox teams, Petty and co decided they “wanted to take all of these takeaways from Harry Potter. But we also noticed that with Harry Potter there was a certain amount of “organic” to how they approached their sound design. Organic being defined as, say, real-world sounds used as the basis for something that isn’t necessarily believable.

It gave Petty and his team all the permission they needed to get creative with some DIY audio work. Petty recalls, “Being home, we started playing with things around the house. So, for example, there’s a mage who has a stick, and she swirls that stick, and you see electricity, and you see this kind of purple swirl. And so for the electrical, we started doing things like using tape and stretching it. Because, think about it, you get that crackle. Who knew you could find magic in such mundane objects?

Without access to their usual suite of on-site resources, Petty’s department began combining their homemade sounds. Petty remembers “layering that [packing tape sound] with, like, the hiss of a high-pressure garden hose on a fence, back and forth. And then layer that by putting microphones in, basically, a kiddie pool, and taking sticks and swirling them around inside.”

Once Petty’s team “put all this stuff together, we added layers of synthesizer to it, to give it some kind of magic, above [feel]. And we found that bringing all of these things, all of these elements together, in this way…unconsciously, it feels good, because we connect with the band, and the water and the spray, and all these things are things that are believable in our minds. And even though it’s a subconscious effort, like you can’t signal them in sound, there’s still a connectivity there.”

Petty could probably rattle off examples of his team’s ingenious work-from-home audio sources all day — from the cracking of eggshells to the sound of candy popping in a cup of water — but one of his examples stands out. really. When the team was gathering audio for some ice-based freeze spells, “it was like taking a pair of jeans, getting them wet, putting them in the freezer, letting them freeze, and then recording the bending and cracking” . Try to spot it in the game!

These DIY sound effects will be saved to a full musical score, which also had a unique thought behind it. Inspired by the game’s concept art, Petty’s team came up with the idea of ​​”starting at the beginning of the game with something more digestible, like traditional composition – so melodies, chords, things that are familiar, brass instruments, that sort of thing.

“And then as the game progresses and the game gets a little darker, what if that composition starts to deconstruct? And we’re just left with light tones and percussion and things don’t necessarily make sense rhythmically, even leaning into jazz, and kind of dissonant in nature”.

Adding yet another layer to the soundscape, to provide juxtaposed sounds when visiting a town full of revelers who have no idea of ​​the trouble outside, Petty’s team “ended up recording a Celtic trio and doing a bunch of Celtic bits. And we sprinkle that all over the place, almost like there’s live players all over town. And it’s kind of a palate cleanser.

You have to admire the creativity on display here. There’s so much for your ears to enjoy, not to mention the impressive voice cast which sees Mythic Quest’s Ashly Burch joined by Will Arnett, Andy Samberg and Wanda Sykes. But would Tiny Tina’s Wonderland have sounded different had it not been for the pandemic painting Petty and co in a corner?

“That’s actually a really interesting question,” Petty mused. “Yeah, to some extent I think the choices would have been different. Not all along, like, we got the vision, we got the direction and we would have pushed in exactly the same vein that we’ve been in. evolved.

“But I think working from home and not having the typical comforts of our studio environments has made us look for alternatives that I think in some cases are more creative. Some of the traditional ways of props, or things that we were using internally…it made us think outside the box. And it was an interesting creative exercise. And, you know, would it sound different? Yeah. Would they be better or Worse? II don’t know. It would just be different. But nonetheless, working from home has created a different work environment and a different approach.

And will Petty learn from this era of working from home in the traditional workplace with him? Petty responds positively, saying, “You know, if anything, it’s opened the door to what people can produce without being in our controlled environments and just making field recordings.”

He adds, “In this case, it sort of takes away all the excuses, like ‘I’m not in the studio, so I can’t create this stuff’. And puts in front of you, like, anything can be [used in the game]…just use your ears, walk around the house, find those things, and seize those opportunities.

“So I think it’s instilled some confidence in how we’re able to create sound in working from home, and it’s also opened our eyes to new ways and new ideas. Back in the studio, [we’re] not relying too heavily on some of the most fundamental pillars and approaches that we have adopted in the past. So it was a learning exercise and a great experience.”

To follow Radio Times Gaming on Twitter for all the latest information. Or if you’re looking for something to watch, check out our TV guide.

Visit our video game release schedule for all the games coming to consoles. Drop by our hubs for more gaming and tech news.

The latest issue of Radio Times is on sale now – subscribe now to get every issue delivered to your door. For more on TV’s biggest stars,listen to the Radio Times podcast with Jane Garvey.