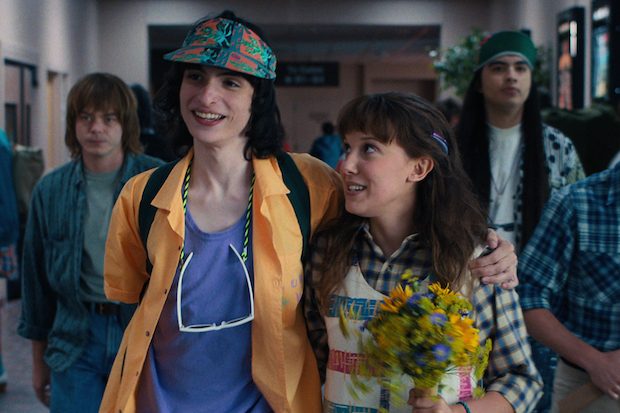 Season 5 of Stranger Things will feature a time jump

It’s said that only six months passed between seasons 3 and 4, but the characters clearly went through major growth spurts after season 4’s production was delayed due to COVID-19.

Duffer recently shared details about the fifth and final season of Stranger Things, explaining that there will most likely be a time jump between the end of season 4 and the start of season 5.

“I’m sure we’ll jump back in time,” Ross Duffer told TVLine. “Ideally, we would have fired [seasons 4 and 5] back to back, but there was simply no feasible way to do it. So these are all discussions that we will have with our writers when we open the room.

“Believe it or not, we’re still working on Season 4. We’re trying to finish the last two episodes, they’re so massive.”

While the Season 4 delays were frustrating for creators and audiences alike, judging by the length of Season 4 episodes, the show is certainly trying to make up for lost time.

While the first three seasons consisted of eight or nine episodes, season 4 is released in two volumes.

The first volume, featuring the first seven episodes of the new series, landed on Netflix on May 27, while the final two episodes will follow in July, all of which have a pretty significant runtime (that’s the least we we can say!).

While the first three seasons consisted of episodes with runtimes mostly under an hour, the first eight episodes of Season 4 of Stranger Things all top the one-hour mark, while the finale will provide two hours. and a half from Upside Down. goodness.

“We learn a lot every time we do a [season]“, added Matt Duffer. “We have learned a lot working with all of our new actors and those with whom we have worked for a long time this year. [making season 4]so I’m sure it’s going to change a bit from that pattern.”

He added: “The end is the hardest thing. It’s obviously the most stressful thing. We really want to stick with the landing.”

The latest issue of Radio Times magazine is on sale now – subscribe now and get the next 12 issues for just £1. For more from TV’s biggest stars, listen to the Radio Times podcast with Jane Garvey.