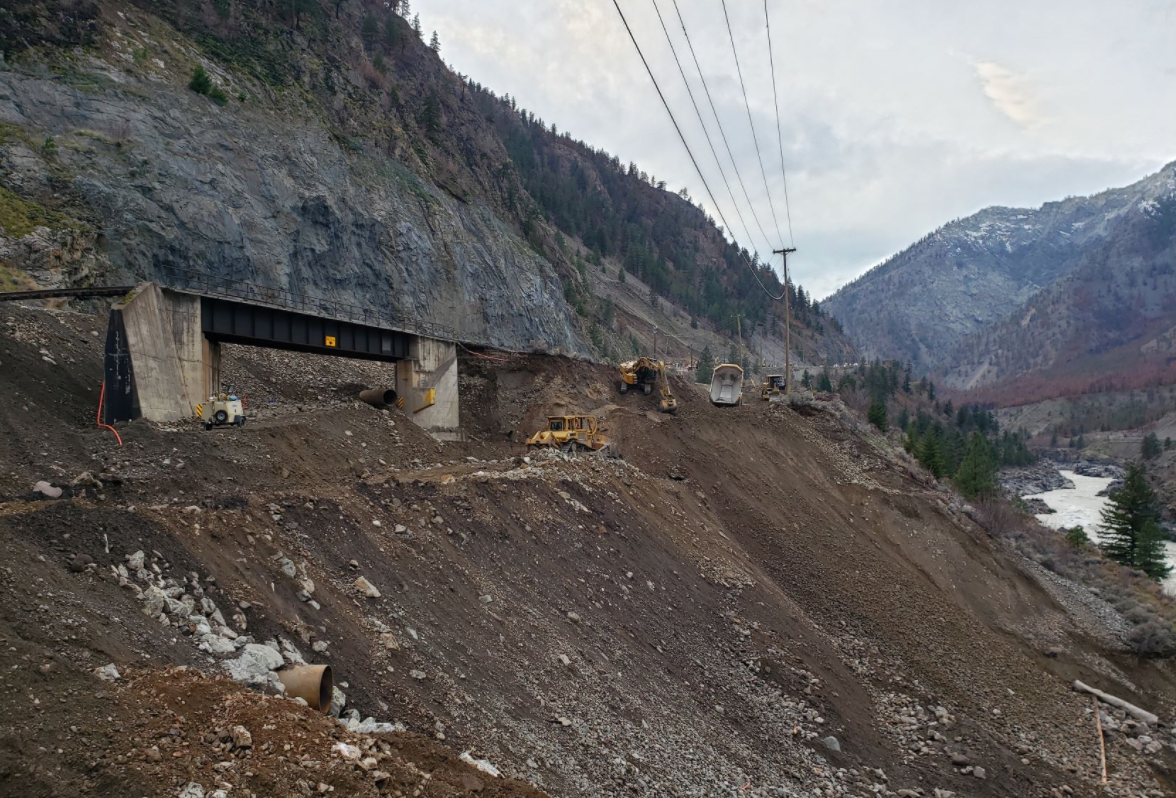 Two months after being swept away by floods and mudslides, Route 1 between Kanaka Bar and Spences Bridge reopened to almost all traffic on Friday.

However, Brad Bushill, Thompson Nicola’s director of operations for the Department of Transport and Infrastructure, tells NL News it won’t be the same highway people remember.

“These are in many cases temporary repairs and we also have size limitations on this route,” he told NL News. “25 meters is the length of the vehicle we can accommodate thanks to some very narrow accesses on and off the temporary bridges near Nicomen.”

He says another major change drivers will notice will be at Tank Hill, east of Lytton, which will now be a level crossing instead of an underpass.

“You don’t go under the rails anymore,” Bushill said. “This will create two different traffic light systems to keep traffic flowing when a train is passing.”

“It’s an ever-changing yard there, so it’s going to keep getting better as the days go by.”

Drivers are warned that there will be significant delays of up to two hours to the normal journey time from Hope to Spences Bridge, travel advisories due to winter driving conditions and reduced speed limits due active construction sites.

Meanwhile, the Department of Transportation and Infrastructure says record snow and the risk of avalanches have delayed construction work on the section of Highway 1 between Hope and Kanaka Bar.

Bushill says crews are waiting for the weather to improve before working that stretch of highway.

“We are really at the mercy of Mother Nature right now with the weather systems coming in. There are some things we can do when the avalanche hazard gets to a certain level and we can mitigate some of the risk, but a lot of the times we have to settle for these temporary closures and let the snowpack settle,” a- he declared.

“Once it’s done, our avalanche technicians check everything and make sure it’s in good shape so they can open it safely, and they will.”

In total, the ministry says there were 15 locations on Route 1 between Hope and Spences Bridge that suffered significant damage after a series of atmospheric rivers in mid-November led to major flooding, landslides and outbursts.

“As far as construction at Jackass Mountain, it’s being handled on the Lower Mainland side and they’re progressing really well on that as well, but this site is also going to be a little bit different,” Bushill added.

“There is going to be a temporary bridge while they continue to work on this massive erosion there in Jackass. So there will be delays there as well.

If all goes according to plan, Highway 1 could be fully reopened to traffic by the end of January, with Bushill noting that the goal is to try and get it back to where it was before the floods.